One of the most common choices for adding electronic control to door is the electric
strike.  Electric strikes are are attached to the frame of a door, replacing the mechanical strike that normally holds the latch of lock in the closed position.  They have a lip that swings outward, allowing the latch to clear the frame and the door to be opened. These avoid the major problems of maglocks, but bring a few downsides of their own.

Electric strikes come in a huge variety of designs and prices, with most commercial grade strikes costing from $150 to $500 dollars.  In general, the more you spend, the longer it will last.  Cheaper strikes may be appropriate for some doors, but higher end strikes will probably save money in the long run for heavily used doors.  There are strikes made to work with specific types of locks and frames and strikes made to work with the largest possible number of locks.  Some are designed to make installation easier.  Some are designed to be field-serviceable, allowing low cost refurbishing when parts wear out instead of replacement.

Electric strikes can be fail-safe (unlocked when power is removed) or fail-secure (locked when power is removed), and many are made to be convertible between this functions.  Electric strikes are typically paired with mechanical locks that are always locked from the outside and always unlocked from the inside.  These two features offer dramatic advantages over maglocks by allowing more careful control of which direction people can move in which situations.

On the other hand, electric strikes: 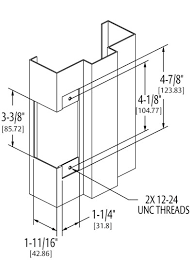 Require modification of the door frame.  Because of the way they work, electric strikes nearly always require that pieces of the door frame be cut out of the way.  When installed well, the strike fits the cuts well and the frame still looks okay.  But the electric strike can never be removed without leaving holes in the frame.  For this reason alone, some office buildings prohibit their use on tenant spaces.  The modification also increases the labor cost of installation.  Some strikes use clever designs that minimize or eliminate frame modification, but these are usually not suitable for high use doors.

Problems from changes in the way doors fit in their frames.  Even if an electric strike is installed perfectly, problems due to the fit of the door may occur down the road.  Many doors sag, settle, or warp over time, have small bumpers added to prevent slamming, or have air pressure differences between inside and outside.  All of these can cause the lock’s latch to press against the lip of the strike.  This, in turn, prevents the strike from unlocking, and the door appears to not work.  Some strikes allow a small amount of pressure, but this is limited.

Sometimes compromise security.  As explained in detail in this great article by Silva Consultants, poor alignment of an electric strike or changes in door fit (as above), especially on doors with cylindrical locks, can easily lead to the lock’s deadlatch no longer functioning.  The deadlatch is a secondary piece that extends from the edge of a lock, designed to prevent the most basic of bypass methods, opening the door with a plastic card.  If not properly aligned with the strike, the deadlatch is allowed to extend and offers no protection.  For this reason, doors with electric strikes are often protected by latch guards.  This does solve the problem, but a locking choice that requires an additional product to ensure security does not sound like a great idea to me.

Limited use on fire doors.  Fire doors are designed, and required by code, to prevent the spread of fire and smoke between certain areas of buildings.  To perform this critical function, fire doors must latch closed during a fire.  As electric strikes work by allowing the latch to move clear of the frame, they must be fail-secure AND must be tied into the fire alarm system to ensure they are secured in a fire.

Like maglocks, electric strikes are often used due to their familiarity.  Sometimes they cost less then better options, but sometimes they require less obvious expenditures that balance things out.

One thought on “Electric Strikes – A So-So Solution”